This was the original program:

For my non-nerd friends, that just means that RandoGirl and I drove to the north end of the Olympic Peninsula this weekend to do the 19-mile climb from Port Angeles, WA, to the top of Hurricane Ridge. The route has over 5,000 feet of elevation gain, and is one of the "must do" climbs in the United States.

RandoGirl would do it once. I planned to do it three times. Why? Because we're going to France for a bike tour in September, and at the end of that tour I plan to try to climb Mount Ventoux on each of the paved roads there. That route looks like this: 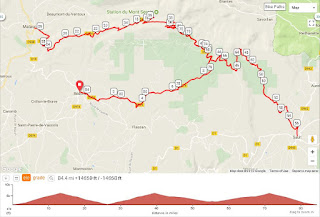 So to test my fitness, I wanted to do this: 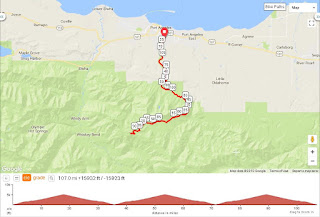 It's a few more miles and a little more climbing, but I figured that if I could do this route in 12 hours then I should be able to do the Ventoux routes in 12 hours, which is about how much daylight I will have in mid-September.

And so, Friday after work, RandoGirl and I drove to Sequim via a very circuitous route complicated by the fact that EVERYONE was trying to get out of Seattle for the weekend (since the forecast was for temperatures near 90) and NEARLY EVERYONE was apparently trying to go to the Olympic Peninsula. Thus, we didn't get to our hotel until after midnight, which meant we were still a little tired the next morning when we got up to drive to Port Angeles and start climbing at 8 am.

But, like I said, I just wanted to see if I could climb this thing three times in 12 hours. Easy. 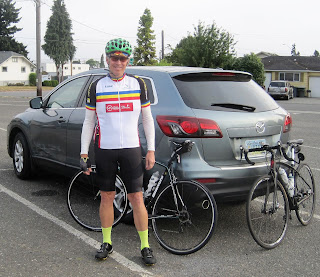 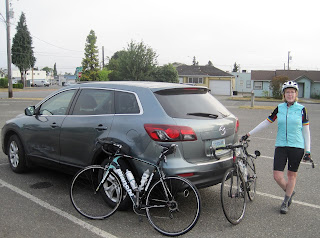 It was cool in Port Angeles, so RandoGirl kept that jacket on for most of the climb. After the first mile, I pulled off those arm warmers ... right after I realized that I was missing my left glove. 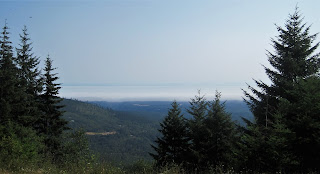 The road for the bottom five miles was under construction, and that's also where the steepest stuff is. But the steep stuff there was rarely in double-digits, and I've been riding a lot of really steep stuff around Seattle lately, so it was rarely hard enough for me to even get into my 28-tooth gear on the back. I paid $15 for a pass at the gate and made sure that it was good for the whole day (it's good for a week), and then took a break about halfway up before entering the first of a series of three short tunnels. 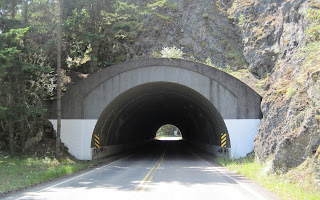 I also turned on my rear light here, since there were a good number of cars. Most of them passed properly, some passed a little close, and quite a few passed with a wave and/or a thumbs-up.

Just before the last tunnel I passed a touring cyclist, and then I passed a couple of other cyclists a mile further. One of those looked to be a guy in his 70s, but he was still churning along. The other fellow was much younger, and he passed me back about another mile further on. Part of me wanted to kick harder to stay with him, but I told myself to take it easy since this was a "for the long haul" kind of day. 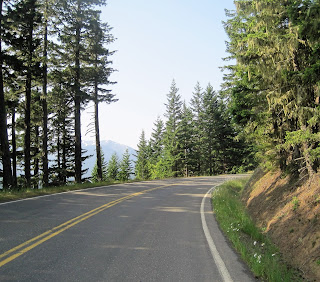 Nearing the top, a couple of fellows on bikes came zipping down, "Woo-hooing" all the way. Pretty soon after that, I first saw the ridge. 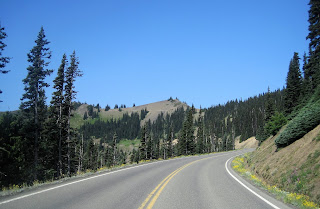 About here you begin to see people hiking along the top. Then you come around the corner into a parking lot full of cars. 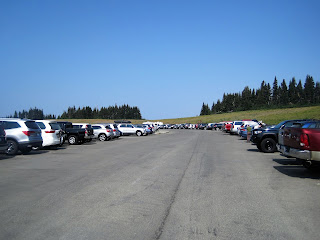 I felt pretty good at this point. My goal had been to do the climb in three hours, and I'd managed to finish in under 2.5 instead. The worst part had been the incessant biting black flies over the last eight miles. I snapped a quick picture of my bike under the sign and started down. 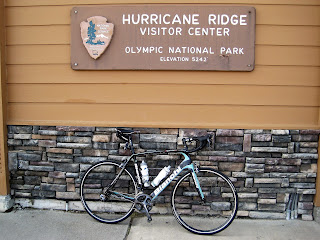 On my first descent, I rode the brakes so much that my hands began to hurt. Frankly, this is one of the carry-overs from my mishap in Andorra a year ago: I tend to be cautious going down any hill the first time. I saw RandoGirl after five miles or so and yelled "hello," and then loosened up a bit to have fun again ... until the bottom five miles. As I said earlier, that part is steeper and under repair, so controlling my speed and dodging holes kept my busy. After hitting a few holes and skating through a couple of gravel patches, I was glad to be done with the descent.

Back at the car, I topped off my water bottles with ice and Gatorade, ate a couple of bars, and started back up. As I climbed the bottom section again, I started to modify my original program.

My thinking here was that maybe I should just climb this thing twice, and then come back to the gate and not have to descend the steep bumpy section again ... plus not have to climb it again. 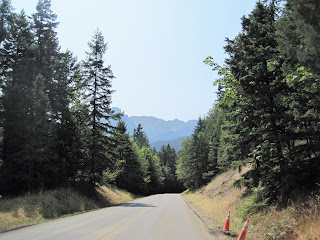 About a mile before the gate, more cyclists came down. One of them stopped and asked me something, and I recognized him as the fellow that had passed me on the way up earlier. He repeated his question, "Do you want to use my pass?" I said, "No, I bought one the first time up." Then he looked at me strange and said, "Oh, yeah. I remember you." By then I was past him, but I'm pretty sure that he was thinking, "What kind of masochist does this thing twice?"

At the gate, there were almost 50 cars stacked up waiting to be allowed in. I rode past them to the booth to see if I needed to wait in the line. The Park Ranger asked if I had a pass, so I showed him mine and said, "Yeah, I bought it when I came through the first time." "The first time?" "Yeah, I went by here about 9 am. There weren't as many cars here then." "They're waiting for parking spaces up top to open up." "Okay. Thanks. I'll see you again in a couple of hours."

As I rode on, I'm pretty sure that he was looking at me then about the way that the cyclist had been earlier. 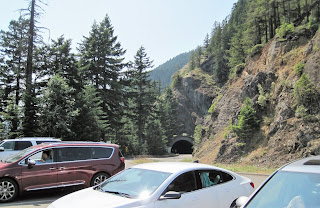 By the time I got back to the parking lot before the tunnel, I was tired. 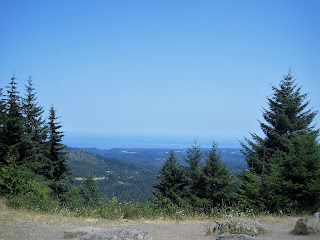 The fog had lifted from Port Angeles, and it was getting pretty darned toasty on the mountain.

I paused to read the placards this time. 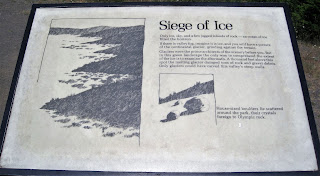 But eventually told myself, "it ain't getting any cooler. And the top ain't coming to me." So, off I went. 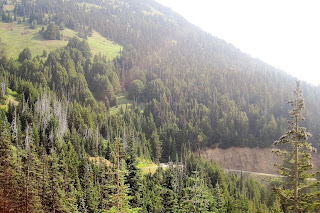 The flies were now impossible. The first time, it had been a little cooler and there weren't as many, but now they were swarming. Worse, I didn't have the legs to regularly sprint away from them, and had not thought to bring any bug spray in the car or "Off" wipes in my pockets. So my only recourse was to swat them out of my face and smack any that landed on me ... mostly on my backside, where they could more easily bite me in the butt through my sweat-soaked shorts.

Just before I lost cellular coverage, I got a text message from RandoGirl that she was done and heading to get some lunch. It was just after 2 pm when I summited for the second time. 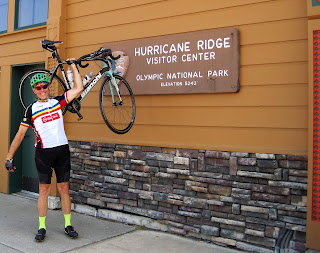 This time I took a break. I finished off my second bottle, ate my other bar, and walked around the visitor's center for a bit. 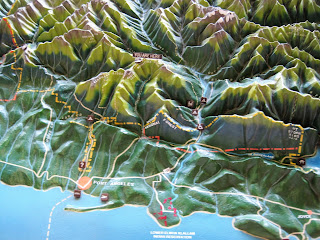 As I started down, I thought about whether I wanted to go to the gate and start back, or if I should head for the car.

To be honest, I'd proved my point. It took me seven hours to do the equivalent of the Malaucene and Bedoin climbs -- the tough ones -- up Ventoux. I could have gone back to Port Angeles, eaten lunch, bought a bottle of Off spray, taken a nap, and climbed back up again in the five hours of daylight that I had left. And, yes, the mistral winds blowing around Ventoux might make me descend even more slowly that I was on Saturday coming down from Hurricane Ridge. But you can't foresee the weather -- you can only train for something to the best of your ability and hope that the plan comes together and your program pays off.

If You Just Want the Good Ones ...

Become a Minion of Randoboy

I Want to Be Like RandoBoy, And Read What He Reads